Venkateswara Temple is a landmark Vaishnavite temple situated in the hill town of Tirumala at Tirupati in Chittoor district of Andhra Pradesh, India. The Temple is dedicated to Venkateswara, an incarnation of Vishnu, who is believed to have appeared here to save mankind from trials and troubles of Kali Yuga. Hence the place has also got the name Kaliyuga Vaikuntham and the Lord here is referred to as Kaliyuga Prathyaksha Daivam. The temple is also known by other names like Tirumala Temple, Tirupati Temple, Tirupati Balaji Temple. Venkateswara is known by many other names: Balaji, Govinda, and Srinivasa.

Tirumala Hills are part of Seshachalam Hills range. The hills are 853 metres (2,799 ft) above sea level. The Hills comprises seven peaks, representing the seven heads of Adisesha. The temple lies on the seventh peak -Venkatadri, on the southern banks of Sri Swami Pushkarini, a holy water tank. Hence the temple is also referred to as “Temple of Seven Hills”. Tirumala town covers about 10.33 sq mi (26.75 km2) in area.

The Temple is constructed in Dravidian architecture and is believed to be constructed over a period of time starting from 300 AD. The Garbagruha (Sanctum Sanctorum) is called AnandaNilayam. The presiding deity, Venkateswara, is in standing posture and faces east in Garbha gruha. The temple follows Vaikhanasa Agama tradition of worship. The temple is one of the eight Vishnu Swayambhu Kshetras and is listed as 106th and the last earthly Divya Desam. The Temple premises had two modern Queue complex buildings to organise the pilgrim rush, Tarigonda Vengamamba Annaprasadam complex for free meals to Pilgrims, hair tonsure buildings and a number of pilgrim lodging sites.

It is the richest temple in the world in terms of donations received and wealth. The temple is visited by about 50,000 to 100,000 pilgrims daily (30 to 40 million people annually on average), while on special occasions and festivals, like the annual Brahmotsavam, the number of pilgrims shoots up to 500,000, making it the most-visited holy place in the world. In 2016, it was reported that 27.3 million pilgrims visited the temple.

The first recorded endowment was made by Pallava queen Samavai in the year 966 CE. She donated many jewels and two parcels of land (one 10 acres and other 13 acres) and ordered to use the revenues generated from that land to be used for the celebration of major festivals in the temple. The Pallava dynasty (9th century), the Chola dynasty (10th century), and Vijayanagara pradhans (14th and 15th centuries) were committed devotees of Venkateswara. The temple gained most of its current wealth and size under the Vijayanagara Empire, with the donation of diamonds and gold. In 1517, Vijayanagara Emperor Krishnadevaraya, on one of his many visits to the temple, donated gold and jewels, enabling the Ananda Nilayam (inner shrine) roofing to be gilded. On 2 January 1517, Krishnadevaraya installed his own statue in the temple and he has made several donations to the temple. After the decline of Vijayanagara Empire, leaders from states such as the Kingdom of Mysore and the Gadwal Samsthanam worshiped as pilgrims and gave ornaments and valuables to the temple. Maratha general Raghoji I Bhonsle (died 1755) visited the temple and set up a permanent administration for the conduct of worship in the temple. Between 1320 CA and 1369 CA, idols of Ranganatha temple of Srirangapatnam were kept in this temple for safe keeping.

After the dusk of Vijayanagara Empire, the temple went into the hands of Golconda in July 1656 and then it was under the French for a short period of time and under Nawab of Carnatic till 1801 CE. With the advent of British during the early 19th century, the management of the temple passed to hands of East India Company, who accorded special status to temple and avoided interference in temple activities.[13] Madras government passed Regulation seven of 1817, which passed the temple to Board of Revenue through collector of North Arcot District. In 1821, Bruce of England had drawn rules for the management of Temple which is referred to as Bruce’s Code.

In 1843 the East India Company transferred the Administration of Temple along with other Temples in Tirupati to Mahants of Hathiramji Muth, who acted as Vicaranakartas. It was under the rule of Mahants for six generations until 1933 when Tirumala Tirupati Devasthanams was formed as a result of the TTD Act in 1933. The Act of 1933 was superseded by Madras Hindu Religious and Charitable Endowment Act of 1951. Again in 1966, the temple was placed under direct control of Andhra pradesh State Endowments Department, with Andhra Pradesh Charitable and Hindu Religious Institutions and Endowments act.[15] In 1979, act of 1966 was rolled back with new Tirumala Tirupati Devasthanams act, where temple administration was vested to a committee consisting of Executive officer, Chairman and two other members nominated by Government of Andhra Pradesh.

There are three Dwarams(entrances) which lead to Garbhagriha from outside. Mahadwaram also known as padikavali is the first entrance which is provided through Mahaprakaram(outer compound wall). A 50 feet, five storied Gopuram(Temple tower) is constructed over this Mahadwaram with seven Kalasams at its apex. Vendivakili(Silver Entrance) also known as Nadimipadikavali is the second entrance and is provided through SampangiPrakaram(Inner compound wall). A three storied Gopuram is constructed over Vendivakili with seven Kalasams at its apex. Bangaruvakili(Golden Entrance) is the third entrance which will lead into Garbhagriha. There are two tall copper images of the Dvarapalakas Jaya-Vijaya on either side of this door. The thick wooden door is covered with gold gilt plates depicting the Dasavathaaram of Vishnu.

Garbhagriha is the Sanctum sanctorum where the presiding deity Venkateswara resides along with other small deities. Golden Entrance leads to Garbhagriha. There are two more doors in between Bangaruvakili and Garbhagriha. The deity will be in a standing posture with four hands one in varada posture, one placed over thigh and other two holding Shanka and Sudarshana Chakra. The deity is decorated with precious ornaments. The deity bears Goddess Lakshmi on the right chest and Goddess Padmavathi on the left. Pilgrims are not allowed to enter the Garbhagriha(beyond Kulasekharapadi (path))

Ananda Nilayam Vimanam is the main Gopuram constructed over ‘Garbhagriha. This is a three storied Gopuram and has single Kalasam at its apex. It was covered with gilt copper plates and covered with a golden vase. There are many deities of gods carved over this Gopuram. On this Gopuram, there is a deity of Venkateswara known as “Vimana Venkateswara” which is believed to be exact replica of deity inside Garbhagriha.

The temple follows “Vaikhanasa Agama” tradition of worship, which is believed to be revealed by Sage Vikhanasa and is propagated by his disciples Atri, Bhrigu, Marichi, Kasyapa. Vaikhanasa is one of the principal traditions of Hinduism and primarily worships Vishnu (and his associated Avatars) as the Supreme God. This ancient texts recommends six times puja(worship) a day for Vishnu, of which minimum one puja is mandatory. Rituals are classified as daily, weekly and periodical. The daily sevas in Temple(in order of occurrence) include Suprabhata Seva, Thomala Seva, Archana, Kalyanotsavam, Dolotsavam (Unjal Seva), Arjita Brahmotsavam, Arjita Vasantotsavam, Sahasra Dipalankarana Seva, Ekanta Seva. Weekly sevas of the Temple include Vishesha Pooja on Monday, Ashtadala Pada Padmaradhana on Tuesday, Sahasra Kalasabhishekam on Wednesday, Tiruppavada Seva on Thursday, Abhishekam and Nijapada Darshanam on Friday. There are no weekly sevas on Saturday and Sunday. Periodical rituals include Jyesthabhishekam, Aaniwara Asthanam, Pavithrotsavam, Koil Alwar Tirumanjanam.

The world-famous “Tirupati Laddu” is given at Tirumala Temple as prasadam. Tirupati Laddu had got Geographical indication tag which entitles only Tirumala Tirupati Devasthanams to make or sell it. Many other prasadams are also offered to Venkateswara and they are classified as Anna-prasadams and Panyarams. Annaprasadams include chakerapongal(sweet), Pulihora(tamarind rice), miryala pongal, kadambham, daddojanam (curd rice). Panyarams include laddu, vada, Dosa, Appam, jilebi, muruku, poli, payasam. Free meals are given daily to the pilgrims. On Thursdays, the Tiruppavada seva is conducted, where huge quantity of pulihora is offered to Venkateswara by heaping up into a pyramidal shape in Tirummani mandapam(ghanta mandapam).

More than 50,000 to 100,000 pilgrims have Darshan of presiding deity, Venkateswara, while on special occasions and festivals, like the annual Brahmotsavams, the number of pilgrims visiting the temple shoots up to 500,000, making it the most-visited holy place in the world. To manage the huge number of Devotees visiting the temple, Tirumala Tirupati Devasthanam constructed two Vaikuntam Queue Complexes: one in the year 1983 and the other in the year 2000. Vaikuntam Queue complexes have rooms where Devotees can sit and wait until their turn for Darshan. According to tradition, it is important for a devotee to have darshan of Bhuvaraha swamy temple lying on the northern banks of Swami Pushkarini before having Darshan of Venkateswara in the main temple.

Recently, the administration introduced a separate queue for pedestrian pilgrims. Free but limited number of biometric tokens are issued for the pilgrims to access this special queue. Tokens are provided on a first-come, first-served basis. The pilgrims can worship Venkateswara on the allotted time slots issued in the token. There are two entry points for the foot-path pilgrims: Alipiri Mettu and Srivari Mettu. Alipiri Mettu is open round the clock, whereas Srivari Mettu is open from 6am – 6pm.

Many devotees have their head tonsured as “Mokku”, an offering to God. The daily amount of hair collected is over a ton. As per legend, when Venkateswara was hit on his head by a shepherd, a small portion of his scalp became bald. This was noticed by Neela Devi, a Gandharva princess. She felt “such an attractive face should not have a flaw”. Immediately, she cut a portion of her hair and, with her magical power, implanted it on his scalp. Venkateswara noticed her sacrifice. As hair is a beautiful asset of the female form, he promised her that all his devotees who come to his abode would offer their hair to him, and she would be the recipient of all the hair received. Hence, it is believed that hair offered by the devotees is accepted by Neela Devi. The hill, Neeladri, one of the seven hills, is named after her.

As per legend, it is believed that Srinivasa had to make arrangements for his wedding. Kubera credited money to Venkateswara (a form of the god Vishnu) for his marriage with Padmavathi. Srinivasa sought a loan of one crore and 11.4 million (11,400,000) coins of gold from Kubera and had Viswakarma, the divine architect, create heavenly surroundings in the Seshadri hills. Together, Srinivasa and Padmavathi lived for all eternity while Goddess Lakshmi, understanding the commitments of Vishnu, chose to live in his heart forever. In remembrance of this, devotees go to Tirupati to donate money in Venkateswara’s hundi (donation pot) so that he can pay it back to Kubera. The hundi collections go as high as 22.5 million INR a day.

In the Thulabaram ritual, a devotee sits on a pan of a weighing balance and the other pan is filled with materials greater than the weight of the devotee. Devotees usually offer sugar, jaggery, tulsi leaves, banana, gold, coins. This is mostly performed with newborn babies or children. 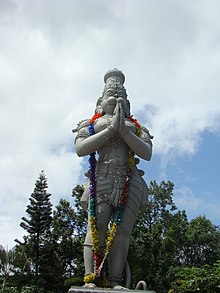